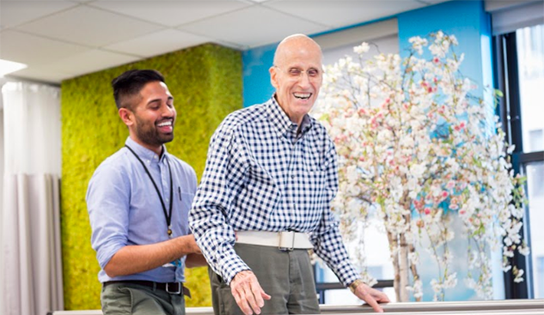 Mrs. Helen Brown arrived at Creekside Center for Rehabilitation and Healing on September 15th, 2018. She arrived to us from St. Thomas Midtown, a local hospital located in Nashville, Tennessee. Mrs. Brown was brought to us with respiratory failure and a humerus fracture in her left shoulder. After being admitted into the hospital due to her diagnosis of respiratory failure, Mrs. Brown was informed that she would need to begin her rehabilitation journey in a skilled nursing facility.

Mrs. Helen Brown arrived in a sling because of a fracture in her shoulder. This fracture was non-weight bearing. Additionally, Mrs. Brown could barely stand on her own due to compromised respiratory support and decreased activity tolerance. She was very weak and shared that she did not want to do much with therapy. After our therapy team worked with her and encouraged her to participate with them, she began to see improvements. When Mrs. Brown saw improvements, she was more motivated to work towards a potential discharge home! Our entire team at Creekside were elated and motivated to continue ushering Mrs. Brown towards her goals.

Within the short amount of time that Mrs. Brown has been with us, she has made dramatic improvements. When she was first admitted, she couldn’t stand on her own. As time went on, she progressed to being able to ambulate to the gym and make an entire lap around our community here at Creekside Center. When Mrs. Brown first began receiving therapy services, she was using a walker; now, she is able to ambulate with just a cane! Formerly very compromised in terms of her respiratory capacity, she is beginning to build her stamina, allowing her to spend greater amounts of time with our therapists and work on strength building.